Geo Travel with a Volcanic Twist

The travel agents at VolcaKNOW were desperate. They’d thought they had a winning formula: sending travelers on once-in-a-lifetime vacations to some of the most exciting places on earth. But it wasn’t turning out that way. “They were getting all kinds of one-star reviews on TripAdvisor,” said Monica Wyrwicz, a science teacher at Hart Middle School, in Rochester Hills. What was going wrong? the agency wondered. What should they do to fix it? 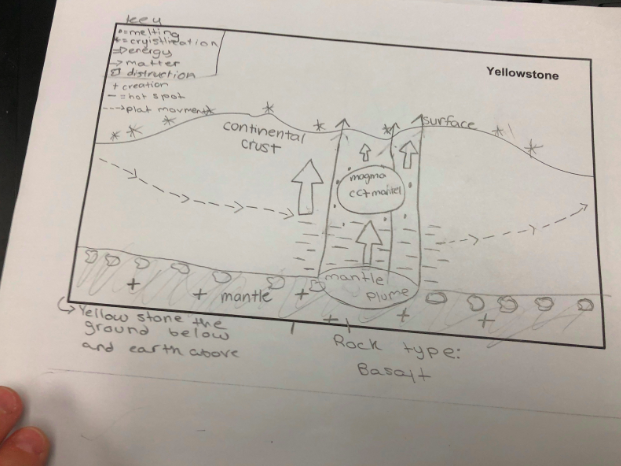 Such is the Challenge faced by seventh graders in Michigan as they pilot Mi-STAR’s Unit 7.2, Cycling of Matter and Energy by Volcanoes. But before they can figure out a solution, they need to learn all they can about four distinct types of volcanoes. Then they can match travelers to a vacation at a volcano that will be perfect for them based on the level of adventure they’re seeking.

To prepare, the students learn about Mount St. Helens, in Washington state; Kilauea, in Hawaii; the Yellowstone caldera, in Wyoming; and the fissure volcano Hekla, in Iceland. They study volcanoes’ characteristics, their rocks, and how often they explode. And they learn about the flow of energy and matter and how it causes volcanoes to erupt and continents to move.  They discover how thermal energy from the Earth’s interior drives the motion of plates on the planet’s surface and how plate motions influence the distribution of volcanoes and earthquakes. Halfway through the unit, Alaska experienced a major
earthquake. “Our kids knew why it happened. It’s an active area, a convergent boundary where the ocean plate and continental plate are coming together,” Wyrwicz said. “They also knew the types of rocks that are formed and that any volcanoes formed here would be 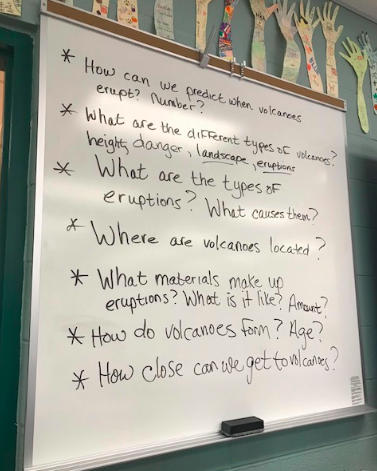 explosive.”
Ultimately, the students decided which of 16 volcanoes would make the perfect vacation getaway for each of four types of travelers, up to and including recommendations on trip insurance. “Caldera volcanoes don’t blow up very often, so none of the teams would recommend trip insurance for a caldera,” she said. But its ben
ign nature might make it the perfect vacation spot for travelers who are looking for a more relaxed vacation getaway.

For an Icelandic fissure volcano characterized by frequent eruptions, however, insurance would definitely be a good idea. And it might be an ideal refuge for a trave
ler looking for steep hiking trails and the possibility of seeing a volcano explode.

Finally the student teams make their pitches to VolcaKNOW. “Their final presentations had to be digital,” said Wyrwicz.. That didn’t faze her seventh graders, who went all out on their projects, including adding YouTube videos. “The kids loved it,” said Wyrwicz.

Shelley Moore’s seventh graders at Reuther Middle School, in Rochester Hills, also had fun with Unit 7.2. “Volcanoes are so exciting that they love investigating them,” she said. “We’d address the flow of energy in class, and then they’d go home and look things up on their own.” Often her students would uncover information that went above and beyond the unit material,” said Moore.

Her students had completed the first seventh-grade unit and had been introduced to Mi-STAR as sixth graders, so they were prepared to hit the ground running. “They had a good grasp of what they needed to do, and it was easy for them to keep the Unit Challenge in focus,” she said.

Bringing earth science into the classroom can be difficult, but this unit does an excellent job, she added. Unlikely activities, including a Jenga game (which shows the relationship between a long dormant period and big eruptions) were not only instructional, they were also popular. “They got to relate the science to something they understand, which is always good,” said Moore.

For Jaime Ratliff, the STEM program coordinator at Lapeer Community Schools, teaching Unit 7.2 was “delightfully, comfortably routine.” Her students had completed the first seventh-grade unit and had been introduced to Mi-STAR as sixth graders, so they were prepared to hit the ground running. “They had a good grasp of what they needed to do, and it was easy for them to keep the Unit Challenge in focus,” she said. Furthermore, after teaching several Mi-STAR units, Ratliff found herself sailing through the lessons. “Now I know what I’m doing and why,” she said. “With Mi-STAR, there’s a lot to take in at the beginning, but without a doubt, it’s worth it.”

One particularly useful aspect of Unit 7.2 is the emphasis on modeling, said Ratliff. “Students develop a model at the beginning, and then they are encouraged to go back and add to it over and over,” she said. “That was incredibly valuable. It was powerful to kids to make their learning visible, then look back and say, ‘I can’t believe I thought that.’ It’s very rewarding for them to be able to monitor their own growth and learning.”

The unit also did a good job teaching students the nuances of claim-evidence-reasoning. “There was more than one response that was correct, but one was a stronger argument,” said Ratliff. “That was one of my favorite things. The students went back and forth to find out which was better.

“That helps them become better citizens of the world,” she added. “In life, the half truths are the worst, and this unit teaches them to look at the big picture.”

Unit 7.2 will be available to Michigan teachers in fall 2019. “I love it, and I can’t wait till it’s rolled out,” said Ratliff. “Other teachers are going to love it too.”