From Seed to Harvest to Seed: Understanding the Cycle of Life

If humans do establish a colony on Mars, the students of Mi-STAR will be ready to help solve the food problem. After all, if you can figure out the best way to grow cabbage in the Arizona desert, Michigan’s Upper Peninsula, Antarctica and the International Space Station, you can probably figure out how to grow crops on the red planet.

Science teachers Shelley Moore and Jayme Swanson have been piloting Mi-STAR’s Unit 6.5, What Plants Need to Grow, which addresses what living things need to thrive and reproduce in those challenging environments. 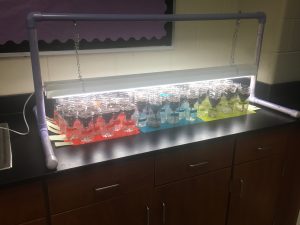 Unit 6.5 is not your typical growing-marigolds-in-a-cup exercise, said Swanson, who teaches at Northeast Middle School, in Midland. “This unit goes way beyond the basics,” he said. “We’re looking at maximizing plant growth, harvesting food and getting seeds for next year’s crops.”

The classes were divided into four teams, which focused on growing leafy green vegetables under conditions that simulate each of the far-flung locales. They planted seeds from two varieties of a fast-growing relative of the cabbage: the regular type and an Astro variety, bred small to fit into the cramped conditions of the International Space Station. Then the teams grew their plants in a variety of conditions to study the effects of heredity, competition and fertilizer.

“The kids really enjoyed it,” said Moore, of Reuther Middle School, in Rochester Hills. “They looked at everything that can influence plant success, and each team developed a plan to make sure they would always have vegetables.” 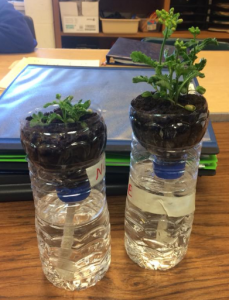 The process required them to gather and analyze a huge amount of data to determine the best seeds and conditions for each area. “It was their own data, so they were connected to it personally; they knew exactly what every single one of the numbers meant,” Swanson said. “When you collect data, you always have outliers, so they learned the value of averaging numbers. There can even be an experiment that doesn’t fit the rest of the data, but because we have so much data, the outliers balance out, students can see that one experiment won’t tank everything.

“Their big ah-hah moment was when the data showed that there was one experiment that produced the most food.”

“I had no idea how the plants would grow,” he added. “The kids were in charge, and there’s a lot of power in that for them.”

Mi-STAR prods students to expand their horizons, and this unit was no exception. “My students’ biggest hangup was that, in the beginning, they didn’t really get that they had to pollinate their plants to get more seeds,” said Moore. “They assumed they could go to Home Depot. I said ‘Remember, you are on the International Space Station. There is no Home Depot. You need to make more seeds.”

They got it, and they did develop a strategy to pollinate their plants and keep the harvests coming. Furthermore, their communication skills grew exponentially.

“We just finished the final assessment, and it’s interesting for me to see how much they really did get out of this unit,” Moore said. “Their ability to explain it to other people has also improved tremendously.” So, if by chance her students do figure out how to grow cabbage on Mars, they’ll also be able to tell others how they did it.

Unit 6.5 will be available in fall 2018 for Michigan teachers who have completed Mi-STAR’s professional learning program.