Mi-STAR is getting kids all over the state enthused about science, and now a couple of Midland Public Schools science teachers are ratcheting up the excitement. Their team-building exercises quite literally have students begging for more.

Robin Allen and Denise Bujalski work in adjoining classrooms at Northeast Middle School. When they began teaching Mi-STAR to their sixth graders, they launched the units in the conventional way: dividing their classes into teams of three or four students and then working through the lessons.

That was fine as far as it went, says Bujalski, but it lacked pizzazz. “I was callling them Team 1 or Team 2, but they’re 11 years old. They want something better than that.” 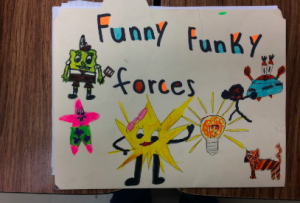 So she and Allen adapted a technique he had previously used with fourth graders. First, each team selects a name for itself that “has to relate to the upcoming unit,” says Allen. For example, one team chose “Wet and Wild” for a unit on water, while a unit on force involved teams such as  “Fearless Force” and “Non-Gravity Santas.”

Choosing a name is a pretty big deal. Before they make it official, the entire team must reach a consensus. “For some teams, it takes a long time,” Allen said. “We let that happen, because we want them to understand that compromise and discussion are important. And we want to make sure nobody gets railroaded.”

Next, the teams develop their rules of engagement. “We give them a manilla folder for their work, and they have to come up with ground rules to list on the outside,” Bujalski said. “It helps them work together. One I read today said, ‘The most physical touch in our group is fist bump.’” 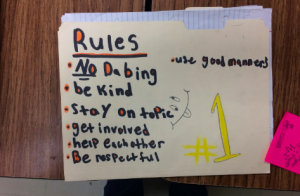 Other typical rules address respect—”Listen to everybody’s ideas”—and decision making. “If you can’t reach a consensus, then what do you do?” asks Bujalski. “Majority rule? Rock paper scissors?”

Finally, the teams make two-sided flags on construction paper, which gives everyone a chance to express their artistic side. One featured Vikings riding unicorns jumping over rainbows.

After the unit, Allen and Bujalski move the flags from the classroom to the hallway outside their rooms, which gratifies the students and also gives them a chance to see their progress as both artists and scientists as they advance through the Mi-STAR curriculum.

The teachers have also learned a lot about team building. “The first time we did it, in September, it was pretty random,” Bujalski said. “With the second Mi-STAR unit, we made sure each team had a good balance of gender and interests, and the third time we had kids take an online personality test.”

The test results guided teachers as they sorted students into teams, so each group had a good mix. The scores also have a self-assessment component intended to improve students’ ability to work effectively in teams. “That lets them think about what they could do to improve,” said Allen. “Do they have a tendency to take over? Do they step back and let other people do the work?” 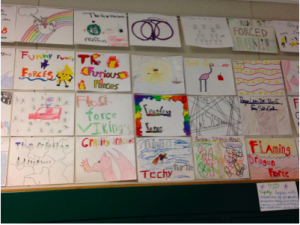 Allen and Bujalski have no doubt that they’ll keep using their team-building exercises as they roll out the Mi-STAR curriculum. “The first time we did it, we didn’t know if it would be worth the class time, but it really is,” Bujalski said. “This approach brings a personal twist for each kid. They’re still learning new science, still working as a team, but they love this. It has their fingerprints all over it.”

If they were to go back to the old way of doing things, the teachers say, they would have to contend with some disappointed sixth graders.

“The kids—oh my gosh—do they enjoy it,” Allen said. “We just finished a unit, and right away they asked if they were going to make rules and flags. I told them no, but when the next unit starts, we will.”