The Michigan Science Teaching and Assessment Reform project (Mi-STAR) designed six new units during the summer of 2017 and began piloting two of them this fall in Michigan classrooms.

The sixth-grade unit, 6.4, introduces students to force and motion through the story of a boy who totals his cell phone. In unit 7.4, seventh graders will learn about thermal energy transfer as they help a local animal shelter solve a puzzling problem.

Monica Wyrwicz, of Hart Middle School in Rochester Hills, helped develop the sixth-grade unit. “It’s all about a young man named Marcus who has unfortunate 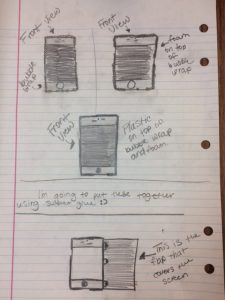 ly dropped his cellphone and shattered it,” she said. “It happens to all of us, but his parents tell him they won’t get him another until he can assure them that he won’t break it.”

Enter Marcus’s best friends, who help him by designing a case that can protect his phone from being damaged by everyday forces. “By the end of the unit, the students will know what materials to use, the design of their case, and how to create a fair experiment,” Wyrwicz said.

“I love this material, and I’m completely invested in it,” she added. “I’m not teaching sixth grade science in 2017–18, but I might just try it out with my seventh graders.”

Unit 6.4 is being pilot tested in the Bangor Township Schools at Christa McAuliffe Middle School and at Northeast Middle School, part of the Midland Public Schools.

The students are investigating ways to 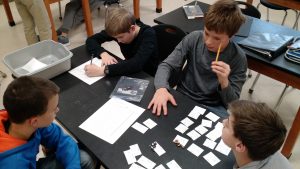 keep dogs cool outside on a summer day without using electricity: no air conditioners allowed. “It’s based on materials they can dig out of a recycling bin,” he said. “They are building crates, designing cooling systems, testing them and refining them as they learn more about energy transfer.”

Along the way, they will learn the fundamentals of temperature—what it means when we say something is hot or cold. As they learn, they are refining their dog-cooling crate designs. “I think it’s going to be a really fun unit,” Matthys said.