While piloting the Mi-STAR unit on Michigan ecosystems last spring, Midland science teacher Denise Bujalski found a perfect opportunity to introduce her sixth graders to a powerful tool from Google.

During the unit, teams of students are assigned to study one of several ecosystems that are threatened by an invasive species, including wetlands, dunes, urban forests, 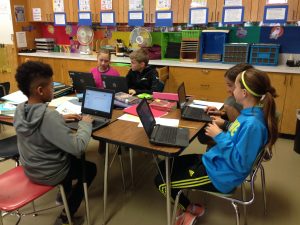 etc. Each student in a team develops a model: a bubble map showing a specific organism at the center surrounded by its relationships—predators, competitors, resources and the like.

In the spring, Bujalski’s students took a slightly different tack. “Northeast Middle School provides laptops for all students and is relying less on pencil and paper, so my science teaching partners, Robin Allen and Jayme Swanson, and I had them use Google Slides to make their models,” she said. “That enabled them to save everything electronically, and all members of each team could see what their partners were doing. Not that they couldn’t share pencil-and-paper models, but this allowed them to look at anyone’s slide at any time.”

Then, once the teams had each made Google Slide presentations on their work, they began making five-minute documentaries, asking the class to save their ecosystem from the invasive species. Their fellow students then had to determine which ecosystem rescue plan would be funded by the class’s limited “conservation fund.” 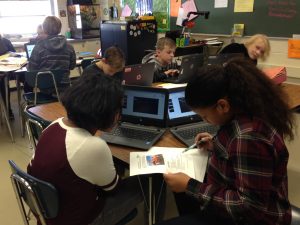 “They used pictures and facts from their Google Slides to make the films, and they looked at other documentaries to see what the pros do to hold an audience’s attention,” she said. “The hardest thing for the kids was to keep it factual and not slip into an emotional plea.”

It’s OK to tug at heartstrings, she told the class, but above all, focus on the science. “It’s a fine dance, getting kids to be good scientific citizens, and ultimately they did a good job of blending science and emotional pull in their documentaries,” she said. “I was completely amazed by the crossover of science and art.”

The students used Windows Movie Maker to make their films, and the Google Slides made it easy to incorporate images and their research findings. “They are very creative, and it really shone through in this project,” said Bujalski. “I plan to use the Google Slides again in this unit.”