Teachers Train to Bring Mi-STAR to the Classroom

Fifteen teachers from across Michigan’s Upper Peninsula went back to school one day last month, gathering at the Copper Country Intermediate School District office in Hancock. When the final bell had figuratively rung, they piled into their cars and dispersed to districts scattered across hundreds of miles. In the coming months, these teachers from South Range to Stephenson, from Ironwood to Escanaba, will be among the vanguard of Mi-STAR’s new pedagogy, which promises to transform middle school science throughout the state. 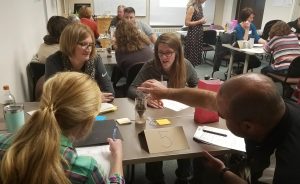 he first six units of the Mi-STAR curriculum in 2017–18, two units each in grades 6, 7 and 8. Within the next two or three years, the Mi-STAR staff expect to release all 22 units of the curriculum, allowing teachers to meet the Michigan State Science Standards.

But before teachers can introduce Mi-STAR to their students, they need some hands-on experience in how it works. So, on Oct. 13, the U.P. teachers faced Shawn Oppliger, who would take them step by step through Mi-STAR’s first unit for sixth graders: Unit 6.1 on the water cycle, which asks students to develop a plan to restore a river whose flow has been disrupted by development.

Oppliger, the director of the Western U.P. Center for Science, Mathematics and Environmental Education, is also on Mi-STAR’s professional learning team. Throughout the day, she walked the teachers through each of the lessons in the unit, from watching a video of a flash flood to modeling the filtration characteristics of concrete and dirt. For their part, the teachers worked through the lessons, playing the role of sixth graders and adding their own insights into the logic of the curriculum. “All scientific models are wrong, but some are useful,” noted one teacher. “The kids will need to realize that a model won’t explain all the movement of water, but it will explain enough.”

As the unit unfolded, teachers shared their impressions of Mi-STAR. “What I know, I like,” said Marcy Erickson, a middle school science teacher in the L’Anse Area Schools. “What’s really nice to have is a curriculum that’s well developed, that I can trust, and that meets the Michigan Science Standards.”

Carrie Meneguzzo, of the Dollar Bay–Tamarack City Area Schools, agreed. “It means so much that it’s aligned to NGSS [Next Generation Science Standards] and the Michigan standards,” said Meneguzzo, who teaches fourth through sixth grade science. “Just looking at the NGSS is daunting; I don’t know how I would develop a curriculum like that myself.”

Mi-STAR has other advantages, she added. “In my district, sixth grade is in our elementary school, and the middle school teacher and I have been trying to bridge the gap between our classes, but it’s hard to do. Adopting Mi-STAR will solve that problem.”

Denise Wilder, who also teaches in the L’Anse schools, was involved in developing the Mi-STAR curriculum and vouched for its accuracy. “We got to work with master teachers, and had a grad student in physics who could correct our misconceptions,” she said.

That high-quality content is a necessity for the many teachers without a degree in their discipline, said Meneguzzo, who has a bachelor’s degree in elementary education. “I minored in science, and I know a lot about my discipline, but it would be a huge learning curve to develop a science curriculum by myself,” she said. “Mi-STAR sets it all out for you.”

For Wilder, who will be teaching science again after a hiatus of several years, Mi-STAR offers a fresh start. “This is a way to get myself up to date,” she said. “Plus, I like that it’s hands-on and relevant to Michigan students.”

Though the training took a day out of their work week, the teachers felt it was worthwhile getting together in the same room. “The most useful thing for me was getting a sense of how the developers expect the lessons to roll out,” Erickson said. “It was also good preparation, and it was nice to finally get a preview of what MiSTAR is all about. I’ve been hearing about it for three years.”

“It was definitely helpful for me, since I’ve been out of the science classroom for many years,” Wilder said. “And it was particularly helpful to have teachers in the workshop that had previously piloted a unit—their input was invaluable.”

Though the initial training is over, Mi-STAR will continue to provide support to the teachers. Oppliger is organizing professional learning communities where teachers can share strategies and discuss their struggles and successes. “We’ll be there for them, but they will probably learn more from each other than they do from us,” she said. “They are the boots on the ground working with students, and they have a lot to offer each other.”